“How do you build a practical camera for industrial applications?” That was the question that guided Dr. Peter Schwider out of research and into the practical arena – and motivated him to found Photonfocus. The company celebrates the 20th anniversary of its founding this year, and demonstrates that its developments are still characterized by an innovative spirit and a keen focus on customer benefits with the new UV CMOS camera from the MV4 series. 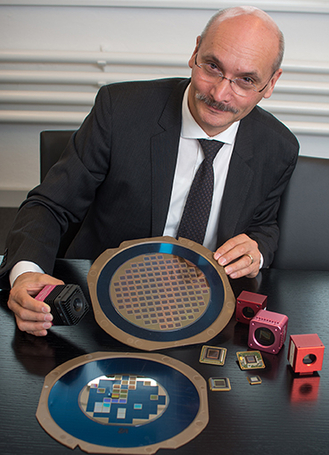 The first CMOS sensor with global shutter and trigger formed the basis for the success of Photonfocus. With this product, the company proved that CMOS sensors were fully competitive against the then dominant CCD sensors. The first A1024 sensor is still sold today and, with its very high full well capacity, is still regarded as a benchmark in the market. This laid the groundwork for the triumph of CMOS technology for industrial use, making it a real milestone for Photonfocus and CMOS sensors alike.

On the basis of this and numerous other groundbreaking proprietary Photonfocus technologies, such as LinLog© technology for high-contrast images with high dynamic range, the company develops and produces sensors and cameras for many different applications. Thanks to the modular concept, individual components such as sensors, processors and interfaces can quickly be adapted to standard Photonfocus cameras, making them ideally suited for quick and easy integration into industrial systems.

The latest development of the company, which has been part of ISRA VISION since 2019, is the recently unveiled and award winning UV camera that combines deep UV image acquisition and CMOS global shutter technology. The result is images without any shearing effect that enable 3D applications in the UV range, thus opening up completely new areas of application.

Further innovations improve algorithms for laser line detection for triangulation, especially on reflective surfaces and in difficult light conditions. The MultiPeak technology goes a step beyond and reliably detects several laser lines at the same time. The processing is integrated in the camera’s FPGA, this lightens the load of data processing in the camera while also speeding up the entire application.

With these innovations, Photonfocus has played a key role in driving and shaping the rapid development from the first CMOS sensor suitable for industrial use to the new UV CMOS camera. The company has remained true to Peter Schwider’s vision throughout the 20 years of its existence: In its anniversary year, too, Photonfocus stands for customized sensors and camera solutions developed specifically to meet the challenging demands of industrial applications.